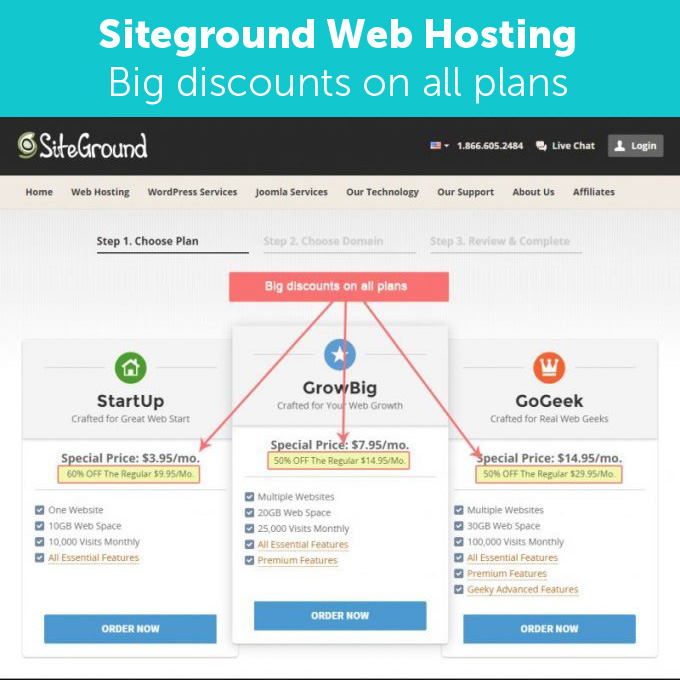 This is my unbiased review of Siteground Web Hosting.
(Spoiler alert – they are amazing!)

(To get a 40-60% discount on each hosting package, simply click on the images below)

After suffering for several months with slow websites and continued slow support tickets with my existing host, things came to a head when I installed a plugin to help track my website downtime.

I was shocked to discover my sites were ‘down’ for close to 14hrs a day! (The server itself was up but I was getting errors that led me to believe I didn’t have enough php memory, despite the fact my websites are relatively simple and not full of bells and whistles.) Too many visitors and my sites just fell over.

Enough was enough. I started researching and quickly found Siteground. Oh boy am I pleased I found them!

After failing to reach my existing host using their live chat as it had been down for a day (this should be alarm bells ringing shouldn’t it?), I fired up the Siteground live chat and saw ‘there are 54 people in front of you’. My heart sank, but for about 10 seconds, which is how long it took for ‘Mirko’ to greet me and start the livechat. Yep. 10 seconds. I used to wait 30 mins or more for my last host. (If they were even available).

I explained my issue to Mirko, who confirmed that he couldn’t see either of my sites as they were currently down. I asked him a few technical questions about the site transfer process and after a short pause he explained the whole process. I then accidentally closed the chat window! Arrgh! I opened a new chat window, got placed with a new support person. Oh no, I’m going to have to explain all this again! So I just said ‘I was just chatting to Mirko but I cut him off’.

Less than 5 seconds later and I’m chatting to Mirko again. I don’t know what technical wizardry went on behind the scenes there, but WOW!

I asked how long it would take to transfer my site. 15mins to 3hrs he said. I thanked him and went away to think about it.12hrs later my existing host finally replied to my support ticket with a generic stock reply about checking my plugins as they had a php limit in place (despite never mentioning this before). Time to switch hosts I think! I fired up Siteground support again and somehow got Mirko again! I asked him about the php limit and he immediately stated that a typical WordPress installation with woo commerce needs 256mb to run (remember I was limited to 128mb with my old host?) and that Siteground give you 768mb to give you enough room to expand in the future. The speed of his reply told me this was not a script, he knew his stuff!

I literally signed up on the spot. 7.58am, I signed on the dotted line and gave my transfer details to their support team. BOTH MY SITES WERE LIVE ON THEIR SERVERS BY 9AM.

Uh, what? Both sites, in less than an hour? All I then had to do was transfer my name servers with my old host (who took a day to respond to my support ticket).

Both sites now work with no problems at all and load like lightning. I even received a welcome phone call from Siteground to help me with any queries. I keep refreshing my sites just to see how quick they load!

Seriously, if you have a slow or useless web host, move to Siteground. Think how much work you could be losing from an unresponsive site. Or how many days you waste waiting for support ticket replies.
I had to contact Siteground for a few issues (caused by me) and they had responded to my ticket before I even got downstairs in my house! Give them a go, I did and I don’t regret it one bit! Wendy.

SMALL PRINT
I should point out this Siteground review is completely unbiased. They haven’t paid me to write this review. I wrote it because it might help some other small business like me save time and I’m so pleased with their service. If you use my Siteground Review link I get a referral fee and you get a faster host, greater security and better support. Win win.

Categories
Looking for my art site?
Want to see my social media posts?
Visit www.wendystephens.co.uk
© Dark Iris Design 2009-2021. All rights reserved. All logos are copyright their respective owners.
Back To Top